Sorry for not writing in German, Our German isn't that good so I'm going to write in English.

We (Tinka also known as Tim & Ninka) have started a new project after finishing and traveling around in my trustful Mercedes LA 911 B truck. (Total Rebuilding a 911)

We have been traveling from Portugal to white Russia with our old truck and now its time for a new truck build so we want to plan our journey to Africa.

After looking around for a new truck we have found an Mercedes 914 AK in the City nearby out village. I have asked my girl to check it out, she is a first mechanic at Scania Holland, we and bought our new project.
This Mercedes was fitted with a crane with platform, a OM366 with hydraulic pomp , single tires and good condition and has driven 86.000km.

Step one: New engine with gearbox. First we want to have some more PS. We already have bigger tires but we wanted to reduce the rpm so also a new gearbox.
After a while we have found a complete powerpack by Annema Trucks in the top of Holland. Great people over there. We called the up if we could check the engine before buying it and that was no problem at all. So me and my girlfriend went over there and checked the powerpack a OM366LA with GV 4/95 -6 /9.0 gearbox and the complete front from the chassis. (this came in handy beacause of all the extra parts we could use)

After bringing it back home we took the engine with gearbox from the chassis and did a complete service and renewed the parts like clutsch bearings etc.and a big bath of course

Time to place it. in the next part

Wow, what a project. Wishing you good luck and all the best along all the challenges with the rebuild.

Good luck for this project. Nice idea with the 200hp engine.
Do you plan to switch the shelter to the 920?
Gruß
Bernd

Wow, what a project. Wishing you good luck and all the best along all the challenges with the rebuild.

Okay, it's larger than the old one. So you build all new. Cool

Hello there, time for the next part fitting the engine

After cleaning everything its time to fit the new engine with gearbox.
First I cleaned the chassis and mounted a new fuel tank of 300ltr that I bought in Germany of one of the member this forum. (Thanks again)

Because of the airintake and intercooler we had to take a piece of the floor out of the cabine.

Because of the new gearbox we had to shorten the driveshaft, Make new brackets to reposition the gearbox, adjust shift rod, exhaust etc etc.


After doing al this it was time to start the engine......

Now back home for the next part. the sub-frame for the box.

I bought it in november 2016 but it was in the storage untill last december because of other
Projects.

Super nice project and some nice work and details on it! Saw the truck this weekend and it looks great! 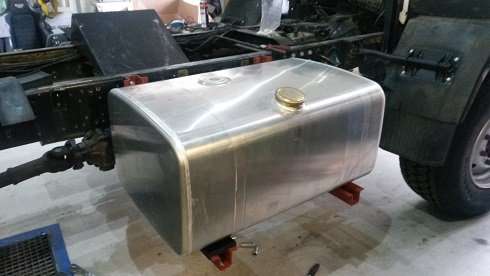 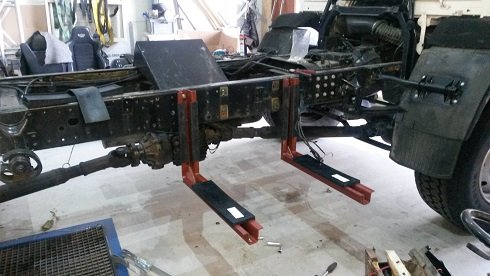 Hej, love to follow your project. I would have little concernes if the convex tank placed on rectangular consoles together with the rubber-granulate-mat are compensating the forces occuring while rough driving mode, the tank could be damaged since you have no formfit, I wonder if convex tank consoles wouldn‘t suit better. Alternatively a block which repeats the shape of the tank upside but rectangular downside.

thanks you for your remak.

Time for the nex part. Truck is back home and because of the subframe I first want to replace the batteries and airtanks. Because I wanted to create more space below the box for storage and an extra diesel tank on the left side, I have decided to place the batteries above each other and place the air tanks including all air valves in the chassis.

So now the measurements are ready for the box time to make the subframe. During the time for building the subframe I started checking out compagnies for making the box or getting the sandwichpanels .
I have built several subframes in the past so I got some experience with this project
So I ordered materials for my own and made de decision to place the pox on twist locks so I can easily take the box of.
Because off this construction I need to build two frames. The frame that attaches to the box and the subframe for the truck. Lets start with the truck parts so firts the brackets and mountingplates to the truck.

now the both frames

We are getting there